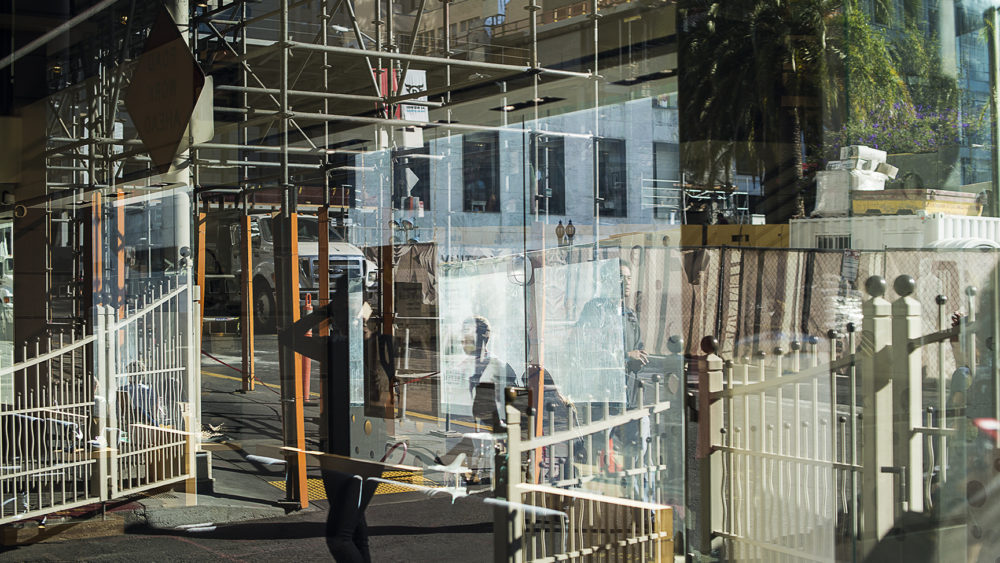 Definition: A tipping point is the point at which a series of small changes or incidents becomes significant enough to cause a larger, more important change.

The expression of this concept is complicated. Corden Potts Gallery in San Francisco invited photographers to submit a photographic interpretation of “tipping point.”

The jurors, Ann Jastrab, editor in chief, All About Photo and Pulitzer-Prize winning photographer Judith Walgren, selected for the exhibition a photo by Sacramento-based photographer Jon Wollenhaupt tilted Cognitive Disruption #3.  Wollenhaupt stated, “the selected photo is from the series Digital Disruptions that was developed over several years while living in San Francisco—a city that embraces the profusion of personal digital technology into every aspect of daily life. These photos explore the emotional state where one is endlessly distracted by the continuous production and consumption of ephemeral digital content that contributes little, if anything, to cultural memory. This emotional state is described by cultural critic Alan Kriby as “the trance—a new weightless nowhere of silent autism.” In these photographs, people are rendered as alienated dream walkers who shift from one state of mind to another, endlessly diverted.  These photos address the “tipping point” concept by asking the question: Are we rapidly approaching a point where it is increasingly difficult to determine where digital life ends, and physical life begins?”

“Jon Wollenhaupt has expertly captured multiple layers of meaning within his highly complex yet overwhelmingly simple visual construction, “Cognitive Disruption #3.” What drew me first to this image was the ability to enter the work through a variety of pathways, scenarios and situations. Once inside, my eye is expertly guided to different visual narratives which illicit a smorgasbord of experiences. Furthermore, I can read Wollenhaupt’s creation in new ways every time I approach it. For these reasons and more – I felt “Cognitive Disruption #3” perfectly fit into our theme, “The Tipping Point,” because, for me, it seems that we have reached this pinnacle in as many environments as the artist has captured within this frame.” – Judith Walgren, MFA

Ann M. Jastrab is an independent curator, photography consultant, editor, and writer. She writes extensively about photographers and photography for the acclaimed website All-About-Photo where she is the Editor-in-Chief. She was the gallery director at RayKo Photo Center in San Francisco for the past decade until their closure in 2017. Ann has curated many exhibitions for RayKo and other galleries in San Francisco while simultaneously jurying, curating, and organizing numerous exhibitions for other national and international venues. Besides being a curator, Ann Jastrab, MFA, is a fine art photographer, master darkroom printer, and teacher as well. She has been leading courses in the San Francisco Bay Area and at the Maine Media Workshops (formerly the Maine Photographic Workshops) in Rockport, Maine since 1995. She is currently the gallery manager at Scott Nichols Gallery in San Francisco.

Judith Walgren, MFA, is a pulitzer-prize winning photographer, artist, teacher, photo editor, curator and writer. She received her MFA in Visual Art from the Vermont College of Fine Art in January 2016 where she began her exploration into the disruption of historic visual archives. From 2010 to 2015, she was the Director of Photography at the San Francisco Chronicle, where she managed a staff of visual content producers, photo editors and pre-press imagers for print and digital platforms. During her tenure at the Chronicle, her team won multiple Emmy Awards for their multimedia pieces and they earned Photo Editing Team of the Year from Best of Photojournalism.