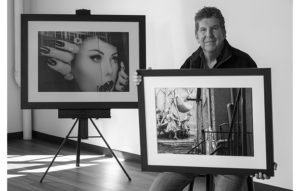 I began as a street photographer in 1999 in San Francisco, where I also developed an interest in photojournalistic work. For several years, I provided photography services to corporations, government agencies, news and media outlets, and not-for-profit entities. For those organizations, my photography supported news stories, helped to build online communities, captured events, and supported organizational marketing and public relations goals.

Education: I have a degree in Fine Art from Grossmont College in San Diego and completed additional studies in studio arts at San Francisco State University. To further my professional development, I have taken workshops and classes with the following organizations:

Since 2010, my focus has been on the development of my portfolio in the following project areas:

The images in this series are metaphors for the way our digital lives have renders us as dream walkers, anxious, alienated beings who are endlessly diverted and distracted. Critic Alan Kirby describes this condition as “a state of trance that takes the world away; a new weightless nowhere of silent autism.” In this state of trance, it has become increasingly difficult to determine where digital life ends, and physical life begins. Indeed, we have become a culture that is perhaps inescapably entangled in social media’s ephemeral, unreal world; we eat, we sleep, we check Instagram, Twitter el al., repeat.

My interest in this series began while living in San Francisco during the onslaught of web 2.0 technologies that began to radically alter the global cultural and social landscape. In many cases, the photos in this series employ frenetic, hyperactive compositions that portray a restless, anxious state-of-mind that is afflicted and disrupted by the addiction to the creation and consumption of ephemeral digital content. The message here is not dystopian; it is a warning. We still have the ability make a choice, to push back against the forces of digitization and technology that are disrupting all aspects of our cultural and personal lives.

Go to my portfolio.

In 2017, after 16 years living in San Francisco, my wife and I moved to Sacramento. Even before our arrival in the Central Valley, I was in a quandary as to how I would proceed with my photographic work. Having lived in San Francisco for 16 years, I had developed a strong sense of place within that urban environment:  I had internalized the political, social, and ideological arrangements that made it unique. During that time, not only had I created extensive bodies of work, but that work reflected the symbolic meaning I attributed to San Francisco as a place.

Spatial Reckoningis about finding ways to align, articulate, and adjust my photographic point-of-view and creative impulses within a new environment. Over the last three years, I have been working to translate my impressions of a city I barely knew or understood, into an authentic expression of place. My approach is similar to how I used to work in San Francisco:  I prowl about on foot looking for the elusive, ephemeral markers that indicate what John Szarkowski called “ineffable dramatic possibilities”—those fleeting, amorphous, often barely perceptible photographic elements that, when captured, take an image beyond mere documentation and create a personal, symbolic record of place. Go to my portfolio.

I found the subjects for these portraits within dense urban environments where they were photographically suspended in stifling, commercial narratives. Subordinated to the will of powerful advertising and promotional overlords, these subjects were dutifully hawking vodka, perfume, pharmaceuticals, cosmetics, or aspirational lifestyles. The process of creating these “progressive portraits,” is like the practice of Aikido, which involves blending with and redirecting an aggressor’s energy. By re-photographing these subjects and providing a new context, the objectifying and exploitative commercial narrative in which they were captured was radically altered. It restored an element of their humanity yet left them bound in a visual limbo. Go to my portfolio.